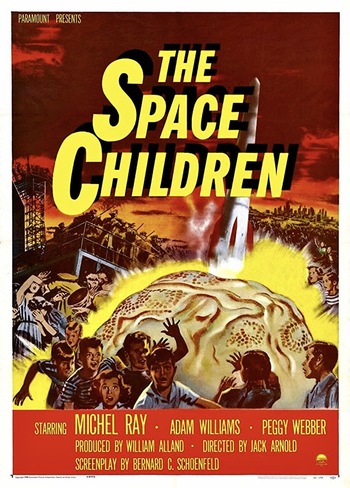 "Slowly... and with horror the parents realized THEIR CHILDREN WERE THE SLAVES OF "THE THING" FROM OUTER SPACE!"
—Tagline
Advertisement:

The Space Children is a 1958 American Science Fiction film directed by Jack Arnold.

Electrical engineer Dave Brewster (Adam Williams) and his family relocate to a coastal trailer park so that he can join the team working on the Thunderer, the latest and greatest of ICBMs and the one which will hopefully settle this pesky arms race once and for all. But the Brewster kids hear a strange sound no adult can detect, and see an eerie light in the sky. Once they arrive at their new home they are lured to a coastal cave where they, and the children of the other scientists, are introduced to a pulsating, glowing blob, which telepathically communicates with them.

Oldest child Bud Brewster (Michel Ray) acts as the ringleader as the children become servants to Azathoth's little cousin, which is a relatively benign fate compared to what happens to adults who discover the creature; Dave Brewster is struck mute or knocked out whenever he tries to tell someone else about it, another scientist gets a short-term memory wipe, and a third fellow is killed though he was an unlikable, abusive drunkard, so nobody really minds.

But that isn't the extent of the blob's powers - soon the military base housing the Thunderer suffers a string of inexplicable accidents, each occurring near a creepy smiling child, culminating in the rocket's test launch resulting in spectacular, fiery disappointment. The military rushes to take down the star-spawn, but the children form a human wall and allow the blob to ascend back into the heavens. Finally free of its influence, Bud explains that all over the planet, other children have done as they did, sabotaging the nukes and doomsday devices of the world's nations. In awe, Anne Brewster (Peggy Webber) remarks that "the world is having a second chance," and the movie closes on a Bible quote: "Verily, I say unto you... except ye become as little children, ye shall not enter into the kingdom of heaven." (St. Matthew, Ch 18, v. 3)

...which glosses over the geopolitical ramifications of this sudden shift in the balance of power with confusing theology. So it's a movie sort of similar to The Day the Earth Stood Still (1951), just, you know, not as good.

And no, The Space Children don't grow up into the Teenagers from Outer Space.

It appeared in this episode of Mystery Science Theater 3000.

The Space Children contains examples of: