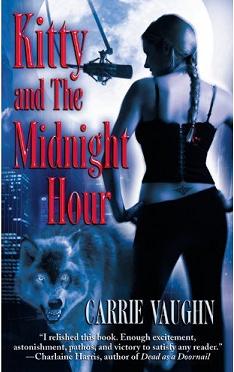 "I collected stories. That was how I kept doing the show week after week. There were always new stories to tell, each one stranger than the one before it."
— Kitty and the Silver Bullet
Advertisement:

Kitty Norville is a successful, rising star in the radio culture. Her radio show, The Midnight Hour, has become an overnight sensation, providing outre music, observations about the bizarre, and call-in radio advice for the loners, the odd, and the unusual.

When the advice includes religious advice for those who can't safely walk into a church or relationship advice for those iffy full moon nights, when the observations are about which popular actor seems a bit too young and avoids sunlight, and the outre music is playing Billie Jean instead of Thriller, it becomes a bit odd. Kitty takes it all in stride, though; compared to dealing with her own lycanthropy, giving advice for a vampire's slaves is easy.

Vaughn has described the main storyline as completed, although further works have not been ruled out. The main novels are:

And the short story collection:

The series is aimed at a bit of a niche market. Each book begins with a song playlist, for starters. While each book does have a single plot that finishes at the end, many of the plotlines stretch from one book to the next. Unlike most books using werewolves and vampires and other horror tropes, and like the Mercy Thompson series, the focus is less on conventional horror and more on the political and social issues underlying the problems. The denouement is less often a massive bloody brawl — Kitty only takes down a single mook and a weak fae herself in the first three books, and the fourth book is the first time a Big Bad is taken out by her hand — and more often about untangling vampire or werewolf politics and managing to not be violent to a nasty politician. As the series has progressed and the stakes have been raised, however, she has gotten continually more proactive and combative, and the books have had increasingly climactic confrontations—she takes out the leader of the Band of Tiamat and two of the Right-Wing Militia Fanatic hunters, and has faced the ultimate Big Bad twice. The whole thing seems to be gearing up toward one incredible showdown.