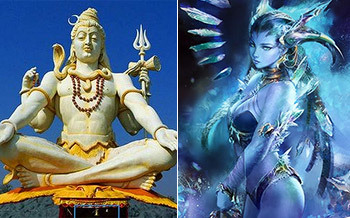 Shiva, god of destruction in Hindu Mythology, and spirit of ice in Final Fantasy.
"I am a big muscly mercenary who in this movie does nothing that Hercules did in any of the myths, and who is constantly stated as having technically not done any of things that WERE in the myths. So basically I have about as much in common with the character of Hercules as I do Theseus, or Conan the Barbarian, or Popeye the Sailor Man."
— The Rock, The Editing Room's abridged script for Hercules (2014)
Advertisement:

Mythology, a subject that is open to interpretation. What one nation calls Jove, another calls Zeus. The deeds they did are scrutinized, and what is considered heroic changes over time. But sometimes, modern writers want to take things further, and present us with gods and heroes far removed from their mythological context. A god known for judgment and cheating on his wife might get flanderized into being all about one or the other. A hero who looked completely human might take on magical aspects. Any adaptational changes may apply.

The reasons are varied.

It is not this trope when the adaptation of a mythical being is closer to the original attitude toward said being because we've overlaid modern sensibilities on them. For example, Zeus being portrayed as a basically decent guy rather than a serial rapist is not this trope, because the Greeks or Romans would have regarded him as a decent guy. Likewise, anyone that is called a hero being depicted as well, heroic would also not count.

This is a Supertrope to Everybody Hates Hades, Everybody Loves Zeus, Hijacked by Jesus and Pantheon Sitcom. This is a Sub-Trope of Adaptation Deviation and Sadly Mythtaken where the writer makes misconceptions about the source material or other parts of mythology, respectively.