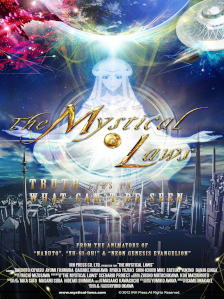 A 2012 anime movie produced by Japanese spiritual movement, "Happy Science", The Mystical Laws is essentially what happens when anime and religious films collidenote There have been previous movies made by the movement as well..
Advertisement:

In the year 202X, a Military Coup occurs in the Republic of East Asia, and the country is turned into the Godom Empire. Under the leadership of Emperor Tathagata Killer, the empire begins a conquest to Take Over the World and destroy all religion. Opposing the Godom Empire is Hermes' Wings, a secret society comprised of politicians and prominent figures from around the globe, as well as Shou Shishimaru, a doctor working for Hermes' Wings who finds out he's the reincarnation of the Buddha.