Animation / The Mystery of the Third Planet 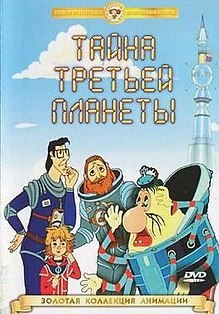 A 1981 film (Тайна третьей планеты in Russian), produced by the famous Soyuzmultfilm studio in Moscow and based on The Voyage of Alice by Kir Bulychev. Stars the voice of Olga Gromova, the first person ever to play Alisa.

In it, Alisa and her father Professor Seleznyov and his friend the Captain travel all over space in the 22nd century, searching for rare animals to bring back to the Moscow zoo. Through their intergalactic travels they pick up increasingly bizarre creatures and eventually become tangled into a criminal conspiracy involving a talking bird. That's about all there is to get plot-wise – most of the time's focused on the surreal, psychedelic Peter Max-inspired world.

Two English versions were released; one oddly enough with Kirsten Dunst as the voice of Alisa, and the other released as Baryshnikov's collection of "favorite stories". Also there is an English fansub on YouTube