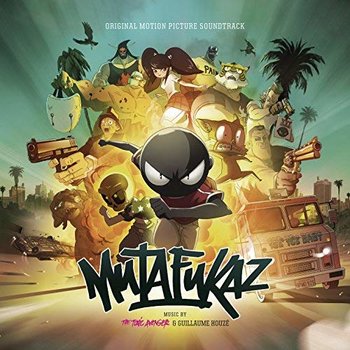 Mutafukaz note known as MFKZ in some countries because of the title being too explicit to release is an adult animated science-fiction film that was a co-production between French and Japanese animation studios (Ankama Animations and Studio 4°C respectively). It was based off a comic series of the same name, and was directed by Shōjirō Nishimi and Guillaume "Run" Renard.

The film follows Angelino, a young man living in the rough, crime-ridden Dark Meat City. He lives a mostly normal life with his friend Vinz and oddball Willy. However, an innocent glance at a captivating girl leads to him being involved in a scooter accident with an oncoming car. Recovering with bruises and a killer headache, Angelino begins to notice strange things happening around him: people with sinister shadows and men in dark suits following him wherever he goes. When he and Vinz are attacked at home by masked, heavily armed police, they then find themselves on the run.

Very quickly, one out-of-the-blue scooter crash propels Angelino into the plots of a race of aliens called the Macho, who are intent on invading the planet.

Oh yeah, did we mention this film was odd?

Mutafukaz was debuted at the AIAFFnote Annecy International Animation Film Festival on June 13, 2017. It was then released in France on May 23, 2018 and in Japan on October 12, 2018. An English dubbed version by GKIDS was released for a limited run along with Fathom Events on October 11 and 16, 2018 in the USA, Canada and the UK.

Beware of unmarked spoilers! It is better to watch this film without knowing too much of the plot details.