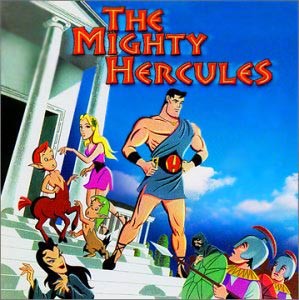 The Mighty Hercules is a cartoon based rather loosely on the legendary Greek hero Hercules, created by Joe Oriolo.

Hercules comes down from Mount Olympus to battle monsters and villains like the wizard Daedalus, Wilhelmine the Sea Witch, and the Mask of Vulcan. Because on Earth his godly strength would vanish, Hercules must don a magic ring to maintain his power. At his side are the beautiful Helena, Newton the Centaur, Tewt the satyr, and young King Dorian of the kingdom of Caladon.