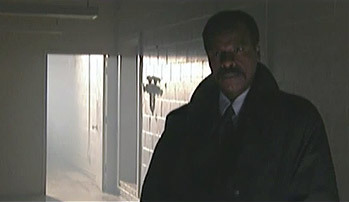 "The most important thing is that you cannot tell anyone that I was here or that we spoke."
Agent Smoulder: Sore Throat, my mysterious informant. Why are you always meeting me in the parking garage?
Sore Throat: I parked my station wagon here in '89 and can't remember where I left it.
— The X Fools
Advertisement:

A type of messenger, the mysterious informant exists to feed information to the good guys, often just enough to keep them on track to expose The Conspiracy. The information is usually fragmentary and/or in cryptic Spy Speak. They tend to meet the main character in secluded areas like parking garages or shadowy alleys, be impossible to find unless they want to be found, always wear a Conspicuous Trenchcoat, and are usually masters of the Stealth Hi/Bye, to prevent heroes from pursuing them. He also insists that I Was Never Here.

In police shows, this role may be filled by a snitch. In shows involving conspiracies, the mysterious informant is usually an anonymous insider. In Speculative Fiction, this role is often filled by psychics and prophets.

The Trope Maker and a major inspiration for Stock Shout-Outs is Deep Throat (decades later revealed to be W. Mark Felt, a deputy director of the FBI), the Washington Post's mysterious informant during the Watergate scandal that drove US President Richard Nixon out of office. The real-life Deep Throat, being Properly Paranoid, did in fact deliver vague, cryptic information in the dead of night in a parking garage and take other extreme precautions against being discovered.

Compare and contrast Mysterious Employer: he tells the characters what to do, but provides minimal information.