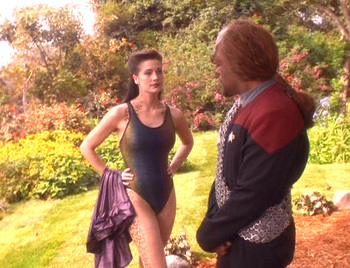 Those spots go aaaaaall the way down.
Odo and Sisk are relaxing at the replimat discussing the name of O'Brien's impending child when Dax joins them, a little worse for wear after several straight weeks of Destructo-Nookie with Worf. The lovers are about to take a vacation to Risa, an unlikely destination for the uptight Klingon. Worf arrives and wants to argue about Dax getting friendly with a former lover, but he gets distracted with plans for their vacation. Though Worf wants privacy to hash through their relationship, Bashir and Leeta manage to invite themselves, and Quark tags along as well.
Advertisement:

Worf is testy through the flight and in a bad mood by the time they touch down on the paradise planet. He's unimpressed by the artificial world. They meet Arandis, Curzon Dax's final lover (as in really final), and Worf immediately grows jealous of Dax's friendly behavior. They then cross paths with Pascal Fullerton, leader of the New Essentialism Party, who preaches a return to traditional Federation values and against the frivolity of places like Risa. Worf seems to agree. In fact, all he wants to do is see the New Essentialists speak rather than vacation with Dax. Meanwhile, Quark has run off to bang some locals, while Bashir and Leeta seem to be hitting on everyone except each other, to Worf's disapproval.

Worf refuses to go swimming with Dax and instead drags her to the Essentialists' speech. Fullerton argues that diversions like Risa are making the Federation weak against its many enemies. Dax and Worf start arguing about the validity of their message. When Bashir and Leeta arrive, kissing each other, Worf has had enough and confronts them on their loose relationship. They explain that they're conducting the Bajoran Rite of Separation, a way of breaking up that celebrates the relationship they had. When they excuse themselves to "work out some final details," the Essentialists storm in and hold everyone at phaserpoint.

Dax disarms an Essentalist but finds that their phasers are empty. Fullerton explains that it was simply a demonstration to show that no one is ever safe. Worf sees wisdom in the stunt and quickly goes back to arguing with Dax. He accuses her of not respecting him, and she accuses him of trying to control her. While Bashir and Leeta conclude their separation ritual, Dax does some sensual sculpting with Arandis. Worf discovers her and becomes infuriated by her perceived lack of fidelity. He runs off to the Essentialists and tells them that he knows how they can drive everyone off Risa.

Dax talks out her problems with the others, and Bashir notes that getting to understand her was quite difficult. Dax counters that understanding Worf is also hard. But they're interrupted by lightning and thunder. The Essentialists arrive and announce that they've hacked Risa's weather machines to ruin its weather for several days as a reminder that everything on the planet is artificial. Everyone's vacation is ruined for a while, and people start packing up. Dax criticizes Worf about his role in the stunt, but he's unrepentant. Unbeknownst to him, however, Fullerton plans on going much further with the demonstration.

Dax finally confronts Worf on why he's so stiff and serious all the time, unlike most Klingons. Worf confesses that, growing up among humans, he was always the largest and strongest. During a soccer game, he accidentally headbutted a fellow player and killed him. Since then, Worf learned restraint, and it's now who he is. Dax hears him but once again begs him to trust her. They are interrupted by earthquakes. Fullerton has cranked the weather machines to overdrive, and they're ripping the planet's surface apart. Worf confronts him and takes back the controls. Fullerton warns that Worf is putting the safety of the Federation and its values at risk, but Worf says that trust is a Federation value, and they must trust its citizens to do what is necessary when the time comes.

Risa is back to normal, and everyone is preparing to head out. Dax takes Worf aside and invites him to go for that swim. Worf never did put on a bathing suit, so Dax suggests he wear nothing at all.