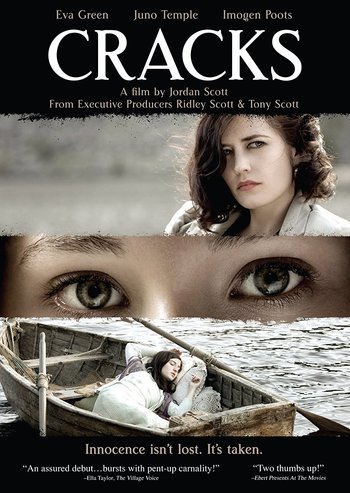 Cracks is an independent drama film starring Eva Green, Juno Temple, María Valverde, and Imogen Poots, which was released theatrically on December 4, 2009. It is based on the novel of the same name by Sheila Kohler.

Set in the 1930's, the story centers on a group of girls at an elite British boarding school and their beautiful, enigmatic diving instructor. Di Radfield (Juno Temple), the leader of the group, has feelings for Miss G (Eva Green). When her place as Miss G's favorite is threatened by the arrival of a beautiful Spanish (Italian in the novel) girl called Fiamma (María Valverde) she becomes increasingly jealous. Meanwhile, Miss G tries everything she can to impress the newcomer. Fiamma however is not taken in by Miss G and becomes increasingly disturbed by her. Miss G's obsession with Fiamma grows and Fiamma, ostracized by the other girls due to Di's jealousy, just wants to go home.

Tropes observed in the movie:

"The most important thing in life is desire"