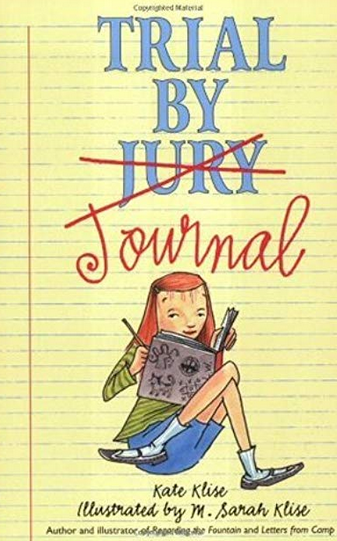 Lily Watson, a normal sixth-grader, becomes the first juvenile juror in Missouri. She is assigned to a case that involves a murder of one of her classmates, Perry Keet, and the suspected murderer, Bob White. Lily's teacher requests her to record her time as a juror in a journal, which she does.
Advertisement:

The book is in the style of a Scrapbook Story, where Lily encounters characters like Rhett Tyle , a tycoon who owns the zoo where the murder took place (and the rest of the town); Fawn Papillon, an aging movie star; Anna Conda, a fashion designer, and Bernie "Buzz" Ard, a gossip columnist. The tale is recorded in a combination of journal entries, news clippings, drafts of Fawn's memior, letters, maps and more.

Trial by Journal is an entertaining children's book that uses animal motifs and a suspenseful plot, with some lightheartedness in a Scrapbook Story that is largely underestimated.