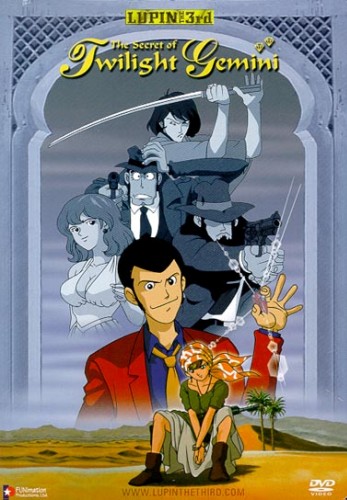 Lupin III: The Secret of Twilight Gemini note トワイライト☆ジェミニの秘密 (Towairaito Jemini no Himitsu) is the eighth of the Lupin III Yearly Specials, first aired on Nippon Television on August 2, 1996. It was directed by Gisaburō Sugii, who worked as an animator on the Lupin III pilot film. The special was licensed by Funimation and given a DVD release in 2002, as well as a rerelease in 2006 as part of the "First Haul" boxset. It was their very first Lupin releases, with Harimao's Treasure following a few months afterward. Unusually, Funimation decided to offer this special two ways – its original uncut version, and a censored version that edits most of the copious fanservice and tones down the dialogue. The "First Haul" box contains the uncensored version, though some early copies had erroneously put the censored version in there. Discotek Media later put out a Blu-Ray. Their release contains both the uncensored version and a remastered version of the censored dub.

It tells the tale of the titular diamond, a treasure hidden for centuries, and unravels the past of Lupin's old mob boss, Dalune. It begins when Lupin pays a late night visit to Dalune, at the aging kingpin's request, where he is presented with half of the Twilight. However, Dalune tells Lupin that the diamond itself is not the gift he has for him. It's merely a key to a much bigger prize: a treasure that has remained hidden for more than three hundred years. When Lupin asks where he can find it, Dalune simply answers, "Morocco."

The legendary thief hops a train, unaware that Inspector Zenigata and an army of Interpol agents are also on board to apprehend him. Plus, a Camp Gay assassin and his mook squad who are also after Lupin and the diamond in his possession. After a near miss by both parties, Lupin ditches the train and leaps into another caper…

The Secret of Twilight Gemini provides examples of: