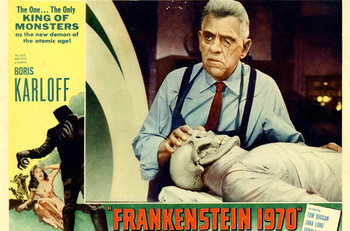 Frankenstein 1970 is a 1958 Sci-Fi Horror film, shot in black and white and CinemaScope, starring Boris Karloff and featuring Don "Red" Barry. The film was directed by Howard W. Koch, written by Richard Landau and George Worthing Yates and produced by Aubrey Schenck.

Baron Victor von Frankenstein (Karloff) suffered torture and disfigurement at the hands of the Nazis as punishment for not cooperating with them during World War II. Horribly disfigured, he nevertheless continues his work as a scientist. Needing funds to support his experiments, the Baron allows a television crew to shoot a made-for-television horror film about his monster-making family at his castle in Germany.

And, yes, as you may have gathered from the title the story takes place the then-future year of 1970.