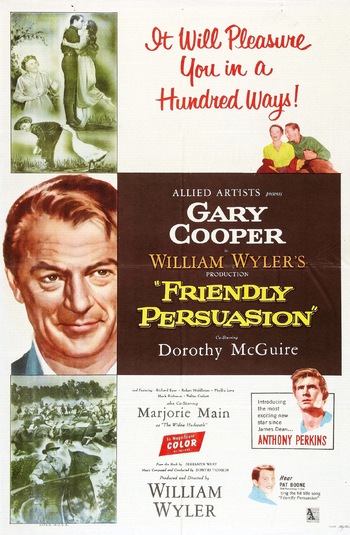 "A man's life ain't worth a hill of beans except he lives up to his own conscience."
Advertisement:

The Birdwells are a family of Quakers in southern Indiana during The American Civil War. Patriarch Jess (Cooper) and his wife Eliza (Dorothy McGuire) have a loving relationship that is occasionally interrupted by normal squabbles, like Jess's purchase of an organ, despite general Quaker disapproval of the playing of music. Youngest son "Little Jess" (Richard Eyer) has an adversarial relationship with the family's pet goose and daughter Mattie (Phyllis Love) is in love with Gard Jordan (Mark Richman), a non-Quaker local boy who has joined the Union Army. But the main conflict is the war, and the hesitation of pacifistic Quakers about joining the war effort. The Birdwells' oldest son Josh (Anthony Perkins, four years before Psycho) is particularly torn about whether or not to join up and fight.

Nominated for five Academy Awards, though it didn't win any. Said to be one of Ronald Reagan's favorite movies; as President he gave a copy to Mikhail Gorbachev during a summit meeting.