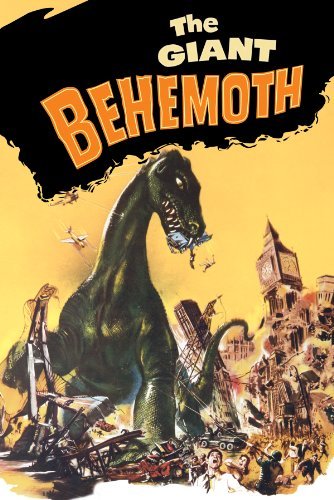 Behemoth, the Sea Monster as it is called in the United Kingdom or The Giant Behemoth in the United States is a 1959 American-British science-fiction B-movie directed by Douglas Hickow and Eugène Lourié, starring Gene Evans

Originally a story about an amorphous blob of radiation, the script was changed at the distributor’s insistence to a pastiche of The Beast from 20,000 Fathoms, though elements of original concepts remains in the early parts of the film and the titular monster’s nuclear breathing power. One remnant of the blob plot remains when a character finds a glowing blob of radioactive protoplasm on the beach.

Basically, the movie’s about the resurrection of a dormant dinosaur called the Paleosaurus caused by the dumping of radioactive waste in the ocean by the marines, the dangerous blobs of radiation giving said monster the power to project electric shocks and radioactive beams. After said behemoth terrorizes the English coast, the realization of destroying the creature with conventional weaponry would spread a dangerous amount of radioactive contamination over the entire country thus preventing them from attacking the monster as it threatens London.