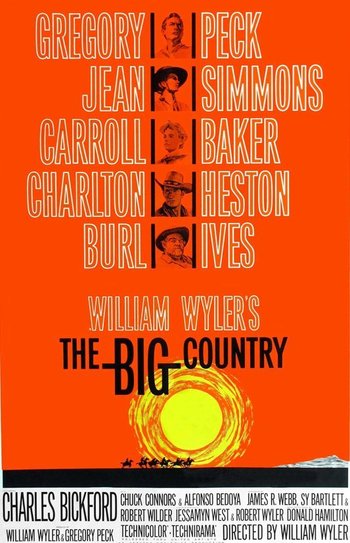 "I'm not responsible for what people think; only what I am."
—James McKay
Advertisement:

Wealthy, newly retired sea captain James McKay (Peck) travels out to the American West to join his fiancée, Patricia (Baker), at the enormous ranch owned by her father, Major Henry Terrill (Bickford). Terrill has been feuding with Rufus Hannassey (Ives), the patriarch of a poorer, less refined ranching clan, and McKay finds himself caught in the middle of the Terrill-Hannassey feud.

McKay—who refuses to be provoked into proving his manhood through violence, having sworn off such behavior since his father died in a meaningless duel—does nothing to stop Hannassey's trouble-making son, Buck (Connors), from harassing him, and he declines a challenge by Terrill's foreman, Steve Leech (Heston), to ride an unruly horse. Patricia, Terrill and Leech consider this to be cowardly in view of the region's lawlessness.

One morning, McKay rides to the Big Muddy, another ranch which contains access to the area's only river, and is thus coveted by both Terrill and Hannassey. McKay persuades its owner, Julie Maragon (Simmons), to sell him her land by promising to continue her policy of allowing both groups access to the river.