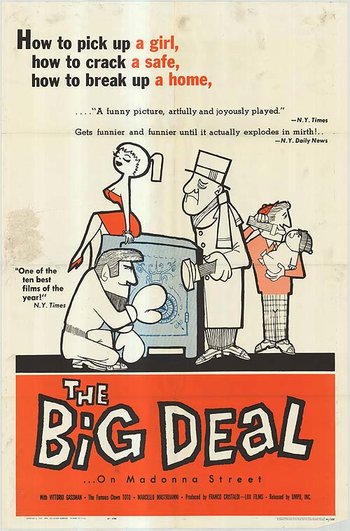 Big Deal on Madonna Street (I soliti ignoti) is a 1958 comedy from Italy directed by Mario Monicelli.

It's a heist movie about a bunch of small-time crooks and hoodlums who plan a caper where they will rob a pawn shop. The idea is that they will enter the neighboring building via the coal chute, sneak into the basement, make their way from the basement into a courtyard, climb up to and over a roof, and then enter the pawn shop via a vacant apartment.

Unfortunately, the gang is a bunch of idiots, and nothing works out.

Marcello Mastroianni appears as Tiberio, a photographer who joins the caper because he's broke and needs cash. Claudia Cardinale had one of her first big parts as Carmelina, sister to gang member Michele, who has a romance with another gang member, Mario.