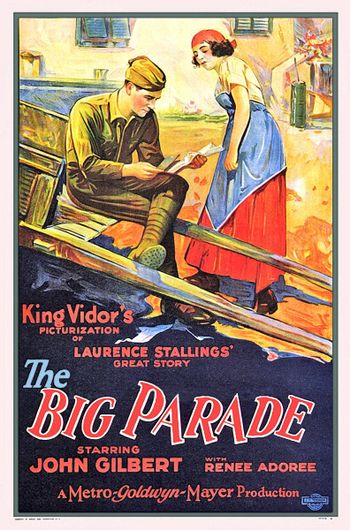 The story follows Jim Apperson (Gilbert), an idle rich boy with a pretty girlfriend who drives a fancy car. His life takes an unexpected turn when the United States declares war on Germany in 1917 and Jim, somewhat to his own surprise, finds himself enlisting. He joins the U.S. Army's Rainbow Division in 1917 and is sent to France. He becomes friends with two working-class men, Slim the construction worker (Karl Dane) and Bull the bartender (Tom O'Brien). When their unit is billeted in a farm house, Jim winds up falling in love with a beautiful French farmgirl, Melisande (Renee Adoree). Their romance, however, is interrupted when Jim's unit is called up to the front and he experiences the terrors of war.

Adapted from Laurence Stallings' autobiographical 1924 novel Plumes, the film is considered ground-breaking for presenting an unflinching look at the horror of war. It won the Photoplay Medal of Honor Award (a precursor to the Oscars) in 1925. It is believed to be the highest-grossing film of The Roaring '20s, having grossed something like twenty million dollars in an era where one could get a movie ticket for a quarter. It was a milestone in the early history of MGM. In 1992 The Big Parade was selected for preservation in the United States National Film Registry by the Library of Congress as being "culturally, historically, or aesthetically significant".