Film / The Best Years of Our Lives 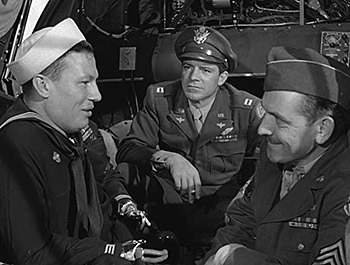 Just after the end of World War II, discharged American servicemen Al Stephenson (March), Fred Derry (Andrews), and Homer Parrish (Russell) return home to Boone City and their loved ones. Their adjustment to post-war life is met with varying levels of success. Al, a banker, finds it difficult to reconnect with his family and even more difficult to be as stern as he was before. Homer, who lost both hands in a fire, can't stand the pity that he detects from others, including his fiancee. Meanwhile, Fred is infuriated that the only job he can get is that of a soda jerk, and discovers that the woman he married before heading off to war wasn't worth it. Somehow, they are going to have to go on with their lives...

This movie is interesting (and this is probably the reason it was so well received) for being one of the first movies that depicted men coming home from the war as it was, rather than romanticizing it like movies and books were prone to.