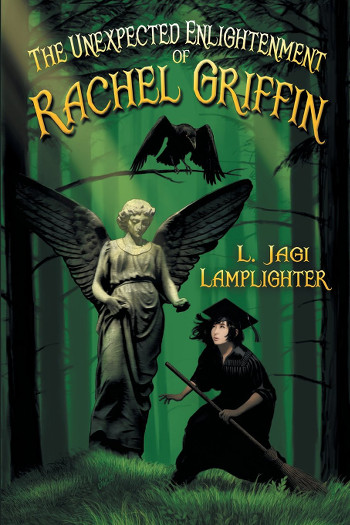 "Once there was a world that seemed at first glance much like other worlds you may have lived in or read about,
but it wasn't..."
Advertisement:

Books of Unexpected Enlightenment are a YA book series by L. Jagi Lamplighter (author of the Prospero's Daughter trilogy). Thus far, the book series is made of 5 books:

Thirteen year old Rachel Griffin has been attending the Roanoke Academy for the Sorcerous Arts (a school of magic like no other) for two days before she discovers hints of a world-shattering—or world ending—secret unknown to any of the Wise; meets a princess and a dragon-slaying hero, and saves her friend from being murdered. On day three...

It is set in an Alternate History: it appears to be our world, but with magic (a la Dresden Files or Harry Potter), but it soon develops that this is a world where monotheism was a brief historical anomaly. Nonetheless, there are just enough hints of things being awry that we can suspect it is indeed our world, altered. As when Rachel sees a statue of a human with bird wings and is baffled by what it could represent — obviously not a fairy, since the wings are not butterfly ones.

Not to be confused with Australian actress, Rachel Griffiths.

The Unexpected Enlightenment of Rachel Griffin contains examples of: