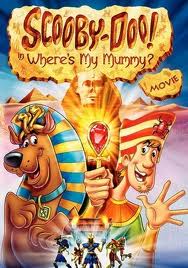 The ninth installment in the Scooby-Doo Direct to Video series produced by Warner Bros Animation, Scooby-Doo! in Where's My Mummy? was the only one to get a limited theatrical release in selected cities of the United States.
Advertisement:

Velma has been in Egypt for six months helping out Prince Omar, who's working on restoring The Sphinx, so the gang tries to surprise her by visiting. However, they run out of water in the Mystery Machine's radiator. While looking for water, they meet an Egyptian nomad named Amahl Ali Akbar, who shows them the way to the sphinx. When they arrive, they meet the former host of a show called "Fear Facers," Rock Rivers, who hopes he can come to Egypt and get some footage to revive his show. Eventually, Scooby picks up Velma's smell, and they find her, surprising her as they had originally intended.

Velma introduces her friends to Omar, then shows them an ancient necklace she found within the tomb of Cleopatra. However, treasure hunter (and grave robber) Dr. Amelia von Butch shows up with her crew to loot Cleopatra's grave. Using modern equipment, they open the tomb via explosion. Once the grave is opened, it unleashes a curse made by Cleopatra, stating that all who enter shall turn to stone. Nobody believes it, so von Butch decides to enter the tomb anyway, despite the fact that Omar had recently been separated from the others and turned to stone. Once in the tomb, a trap is set off, splitting up the gang.

This film provides examples of the following Tropes: