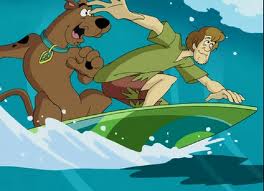 Everybody knows how to surf!
Aloha, Scooby-Doo! is the eighth installment in the Scooby-Doo Direct-to-Video Film Series produced by Warner Bros. Animation.

This movie shows Mystery Incorporated in Hawaii on an all-expenses-paid trip thanks to Daphne, who won a contest to design some new swimwear for a surf company called "Goha Aloha" (who's also sponsoring the gang's trip to Hawaii). Daphne's supposed to meet up with a company representative named Jared Moon in a town called Hanahuna Bay, which hosts an annual surfing contest called "The Big Kahuna of Hanahuna." However, there's a lot of conflict surrounding this year's contest—traditionally, the contest is only for locals, but the mayor has now made it open for everyone, including mainlanders. Also, there's been a lot of scary stuff happening in and around Hanahuna Bay, relating to an evil spirit known as the Wiki-Tiki, who also has an army of little tiki-demons. Not long before the surfing contest, the Wiki-Tiki and it's mini-demons attacked the beach where the contest is supposed to be held and kidnapped Snookie, a local girl—Manu, Snookie's boyfriend whose also the best surfer in the area (and is also the current "Big Kahuna of Hanahuna"), agrees to help the gang solve the mystery of the Wiki-Tiki and rescue his girlfriend.

Oh, and Daphne's in the surfing contest.