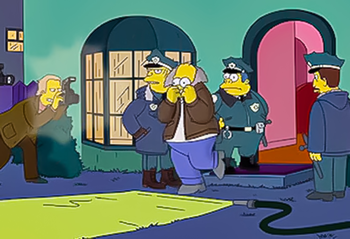 The neighbors have come out in full force, congregating en masse around the waiting police car, watching with fascination as I am pushed down into the backseat. The belt is drawn across me and the door beside me slams. The large officer gets into the front, his radio still crepitating; the younger one gets into the back, beside me. The neighbors are closing in now like a slow wave, leaning, peering, pointing, their mouths opening and closing with silent questions.
— Forbidden
Advertisement:

All of the threads have been pulled, The Summation has been made, the suspect has given his Motive Rant, and the lead detective has given the order to make the arrest, homages/shout-outs to Hawaii Five-O ("Book 'em, Danno!") optional.

Cue the walk of shame, i.e. the Perp Walk, to the police car, past a group of onlookers that may include family, friends, enemies, or the media. In Fiction Land, this is often done in Slo Mo, and poses a much more significant risk for a Vigilante Execution than in Real Life. In some places (like Japan, for instance), the suspect is often offered the "dignity" of a cloth covering their cuffed hands and underaged suspects' faces are blacked out; in America, only shows like COPS will blur suspects' faces (to avoid any possible jury pool poisoning), but any objects covering hands and/or faces are generally self-provided.