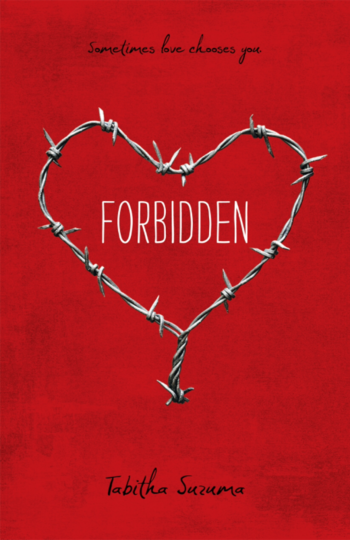 For my part, the choice has already been made. Having the children taken into care is something I have been trying to guard against since the age of twelve. No sacrifice is too great to keep my family together, yet the long path ahead looks so rocky and steep that I regularly wake up at night fearing I will fall. Only the thought of Maya at my side makes the ascent seem possible at all.
— Lochan Whitely
Advertisement:

Forbidden by Tabitha Suzuma is a deconstruction and reconstruction of Brother–Sister Incest. Social anxiety and Promotion to Parent are also big topics.

The story of the Whitelys: a Big, Screwed-Up Family, with a Disappeared Dad, a neglectful, alcoholic mum, and five children. With their parents almost completely out of the picture, the eldest two children—Lochan (17) and Maya (16)—have been Promoted to Parents for their three younger siblings:

Working together to take care of the family and keep social workers away, they've become Living Emotional Crutches for each other, and grown close… very close…