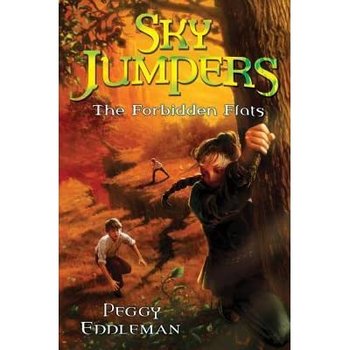 Forbidden Flats is the second book in the Sky Jumpers series by Peggy Eddleman.

A few months after saving her town from bandits, Hope and her friends are gathering Ameiphus from the woods, when all of a sudden, a huge earthquake hits White Rock. At first, it seems as though not much damage was caused aside from some huge fissures.

However, then they discover that the Bomb's Breath over White Rock is lowering.

Mr. Hudson finds out that metals from inside the mountains are releasing fumes from the newly-opened fissures that are causing the Bomb's Breath to lower. He also theorizes that they only have twenty-three days before it reaches the houses on the outer ring and starts endangering people's lives. The good news is, there's a way to counter it. A mineral called seforium can be used to counteract the fumes and return the Bomb's Breath to its normal position in the air. The bad news is the only place they can find it is the mountaintop town of Heaven's Reach, the mayor of whom is NOT an easy person to agree with. Plus, the town is so far away, there's a chance they may not get it back to White Rock in time.

However, despite the risks, they know they still have to do it. So, Hope, Aaren, Brock, Mr. Hudson, Aaron's mom, and some others from White Rock pack their bags, mount their horses, and grab a trailer to begin their long trek to save their town. Coming with them is a mysterious traveler named Luke, who Hope finds somehow familiar.