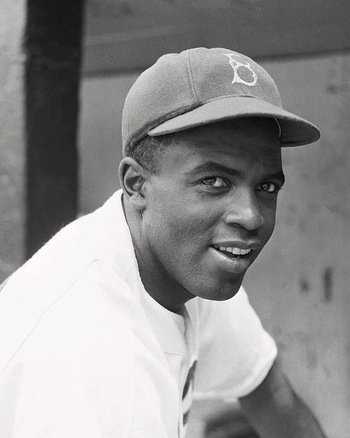 "A life is not important except in the impact it has on other lives."
Advertisement:

Jack Roosevelt "Jackie" Robinson (January 31, 1919 — October 24, 1972) was an American baseball player who was a second baseman for the Brooklyn Dodgers from 1947 to 1956. While an amazing athlete in many respects, he is most remembered for being the first African-American player to break the color barrier in Major League Baseball.

Although black players had appeared in top-level professional baseball in the 1870s and '80s,note For the truly pedantic, William Edward White is typically recognized as the true first black baseball player, though he passed as white, while Moses Fleetwood Walker was the first openly black player. and may have done so (very) briefly in the 1930s,note There is some evidence that the cellar-dwelling Washington Senators of the 1930s played a couple of Cuban journeymen for a few games—players who, though not "African-American," would have been regarded as "black" in either the 1930s or the 2020s, some 10 years or so before Jackie Robinson. The rest of the MLB owners, realizing the Senators were desperate to avoid bankruptcy in those Depression years, chose to look the other way, and the incidents were mostly memory-holed. an informal but rigidly-enforced "color line" emerged in the major leagues, which led to the creation of the Negro Leagues in the early 20th century.

Robinson, who was a four-sport star at UCLAnote baseball, basketball, football, track and began his professional career in the Negro Leagues, was the first African-American player to break into the majors in defiance of the color line, albeit only after a preliminary season with Brooklyn's farm team, the Montreal Royals. And as revolutionary as his initial signing was, he changed the game even more once he actually took the field. For instance, on his first game with Montreal against the Jersey City Giants, Robinson had four hits, including a three-run home run. He also scored four runs, drove in three, and stole two bases in the Royals' 14–1, spectacular play you'd expect from a Hollywood movie like The Natural.

Unfortunately, Robinson also endured unending racial abuse, which hit particularly hard in his season with Montreal; he was almost driven to a nervous breakdown, but the fans of the Canadian city helped him weather it as their summertime hero as that city on an island proved an oasis he was forever grateful to have. It didn't affect his play as he helped the Royal become the league champions of that season. The challenge was barely any less when Robinson moved on to play for Brooklyn, but he won the doubters over to the frustration of the bigots and even had the support of opposing players like Hank Greenberg who was all too familiar with bigotry considering he was Jewish.

On top of being a skilled, versatile fielder capable of playing practically anywhere on the infield and outfield, Robinson defied the pure-slugging approach of his contemporaries, instead combining power with incredible speed and plate discipline for a more well-rounded offensive approach, setting a template that generations of ballplayers have followed since. He was the inaugural Rookie of the Year, racked up six All-Star appearances and an NL MVP award, and made an iconic home-plate steal in the 1955 World Series to help the Dodgers finally win their first World Series after 40 years of coming up short. His impact was so great that his jersey number, 42, is retired across all of MLB.