Lives in a Van 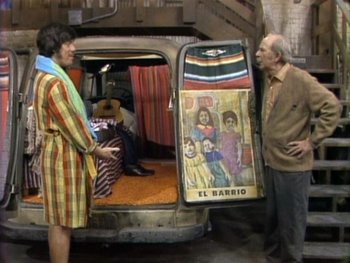 "I am 35 years old, I am thrice divorced, and I live in a VAN down by the RIVER!"
— Motivation Speaker Matt Foley, Saturday Night Live
Advertisement:

A Base on Wheels for the less fortunate, this is when a character has no actual house to return to at the end of the day, and are forced to eat, sleep, and live inside a vehicle they own. While a slight upgrade from a Cardboard Box Home or simply living in the streets, it still has a lot of difficulties. After all, you can't exactly bring a date back to your place if you drove it to the restaurant. If the trope is played for laughs, expect many jokes about someone's house being towed.

Note that this trope doesn't apply to actual Base on Wheels, since they've been designed for a person or several to live in for an extended period. This trope applies to regular cars, boats, and planes that the owner resides in in lieu of a permanent residence. Hippie Vans and other small campers that are designed for sleeping in but not actually living in are somewhere in between.

Truth in Television for some, sometimes by choice but often due to poverty.