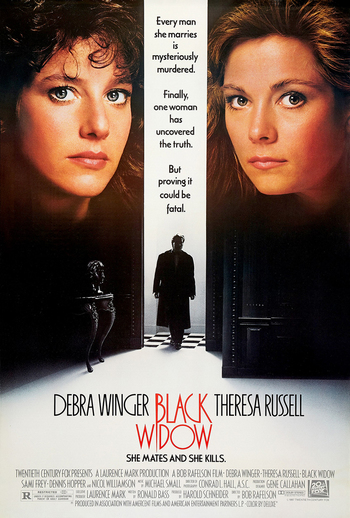 Every man she marries is mysteriously murdered. Finally, one woman has uncovered the truth. But proving it could be fatal.
Advertisement:

A mysterious woman (Russell) uses different identities to charm old wealthy men. After marrying them, she poisons them and inherits their fortune. Justice Department agent Alexandra Barnes (Winger) is puzzled by the similarities between the death of several men and she comes to the conclusion that they were killed by the same woman who used different identities. She manages to locate the suspect in Hawaii. In order to expose her, she uses a cover identity and she befriends her.

Black Widow, a 2007 made-for-television movie produced by RHI Entertainment and starring Elizabeth Berkley, Alicia Coppola and Adriana DeMeo, is a loose remake of this film.

Also not to be confused with the unrelated Marvel Cinematic Universe Black Widow movie. Though both this film and that movie are now owned by Disney thanks to their buyout of 20th Century Fox.