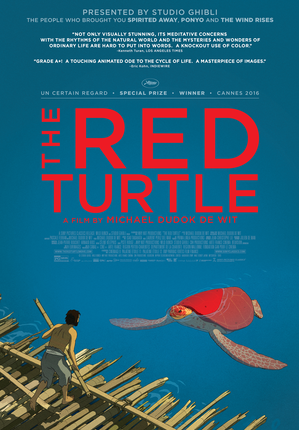 The Red Turtle (French: La Tortue Rouge, Japanese: レッドタートル ある島の物語) is a 2016 Franco-Japanese animated fantasy film co-written and directed by Dutch-British animator Michael Dudok de Wit. The project was produced in collaboration between Prima Linea Productions, Why Not Productions, Wild Bunch, CN4 Productions, Arte France Cinéma, Belvision Corporation, and Studio Ghibli, the latter of whom had fallen on hard times in the wake of Hayao Miyazaki's retirement and the box office failures of The Tale of the Princess Kaguya and When Marnie Was There and got involved with the film as a means of getting back on their feet. The film also features additional animation from A. Film, Dreamwall, and Kecskemétfilm Kft.

Devoid of dialogue, the film tells the story of a man who becomes shipwrecked on a deserted island and meets a giant red turtle, whose life intertwines with his own in an unexpected way during his fight for survival.

The Red Turtle was the final Ghibli film produced by Isao Takahata before his passing on April 5, 2018.