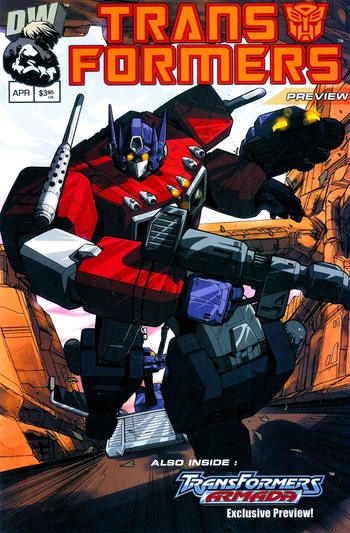 In 2002, a new Transformers: Generation 1 comic was published by Dreamwave Productions, alongside an adaptation of the Unicron Trilogy (Armada, Energon, and Cybertron); this was the first to officially use the title Generation One. Simon Furman was brought back to write parts of it, as well as several lesser-known writers. It began as a set of mini-series which gave rise to a short-lived ongoing title. Ideas were taken from both the G1 cartoon and the Marvel comic, and even Beast Wars.

The main draw of the Dreamwave comic was the highly detailed, manga-influenced artwork of Pat Lee - which, as it turned out, included a lot of Dull Surprise and vaguely sexual poses. However, most of the actual drawing, colouring, and inking was done by uncredited and frequently unpaid guest artists while Lee was buying fast cars and sponsoring his girlfriend's Miss World campaign. Following a series of unethical business practices, scandals, and outright crime, Dreamwave declared bankruptcy, leaving both the G1 and Unicron Trilogy stories unfinished.