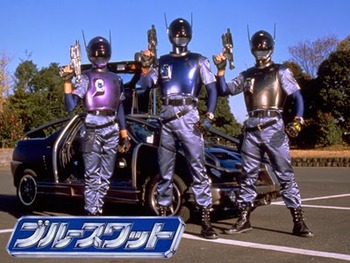 Protecting Tokyo from the scum of the universe.
Blue SWAT is the thirteenth entry in the Metal Heroes franchise, airing from 1994-1995.
Advertisement:

Deciding to take advantage of Earth's problems, an evil band of aliens called the Space Mafia decide to invade in the mid 1990s. To defeat them, a special covert anti-alien police unit called Blue SWAT is established by the Japanese government. One day, the Mafia attacks Blue SWAT's base and kills them all. Everyone, that is, except three brave heroes. The heroes set up shop on their own and with the help of their allies, dedicate themselves to defeating the Space Mafia.