Anime / Unico in the Island of Magic 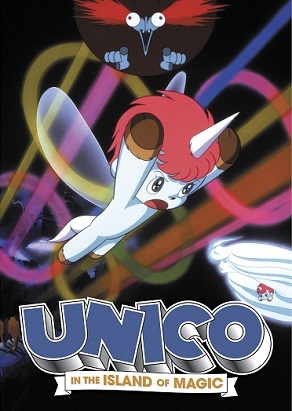 Unico in the Island of Magic is a 1983 animated feature film based on the Unico manga by Osamu Tezuka. The film is the second to be based on the character (the first being The Fantastic Adventures of Unico) and, like its predecessor, was created by Sanrio and Tezuka Productions with animation by Madhouse.

In this film, Unico meets a kind-hearted young girl named Cheri whose older brother, Toby, is working for the evil Lord Kuruku. Kuruku, a very powerful demonic entity, plans to turn all living creatures, animals and people alike, into unusual zombie-like beings called "Living Puppets" to be his slaves. It's up to Unico and Cheri to stop Kuruku and save everyone from his wicked magic.

Like The Fantastic Adventures of Unico, the film was dubbed into English, released on VHS, and shown on the Disney Channel during the eighties. Discotek Media gave the film a bilingual DVD release in 2012, marking the first time the original Japanese version was commercially available in America. Sadly, it is once again out of print in the U.S.

This is also the final time Osamu Tezuka was involved with the Unico series before passing away in February 1989. The 2000 animated short 'Saving Our Fragile Earth: Unico Special Chapter would mark the first animated project starring the protagonist without Tezuka.

Unico in the Island of Magic provides examples of the following tropes: