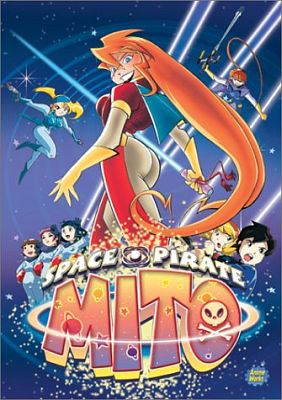 Uchū Kaizoku Mito no Daibōken, released in English speaking countries as Space Pirate Mito, is an extremely obscure 1999 anime that lasted two seasons (split between the Winter and Summer TV seasons), each spanning 13 episodes. The series centers around Aoi, a fairly typical Japanese teenager whose father had passed on and whose mother, Mito, works overseas as a model. Only... his mom isn't really who he thinks she is.

In reality, Mito is the galaxy's most infamous space pirate with enough guts to outshine a supernova. She is also a three foot tall childlike alien - yet all she really wants is to be called "Mom". When the Galactic Patrol follows her to Earth, Aoi is pulled into an intergalactic goose chase that brings him to all corners of the universe, along with the first working Earth mom to carry a pulse rifle.

The series is a bit... odd, but still manages to be enjoyable with its colorful art style and strange cast of characters. Just don't try to make too much sense of the plotline. You will severely hurt your brain.

The series was released in English by Media Blasters, though with a 5-year gap between the releases of the two seasons. While an English dub was produced for the first season, Media-Blasters opted to release the second season sub-only, due to the changes in the anime market over that time period.

The series was later rescued and re-released by RightStuf's anime division, Nozomi Entertainment.

Both seasons are available on Crunchyroll and Nozomi's YouTube channel.