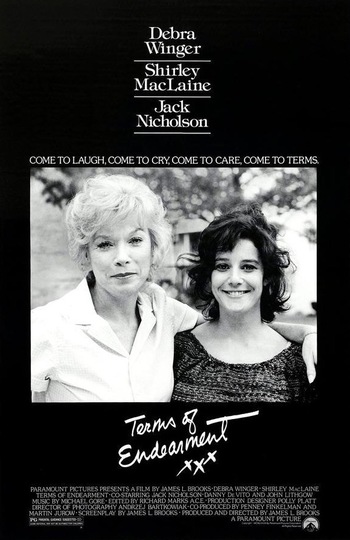 "Come to Laugh. Come to Cry. Come to Care. Come to Terms."
— Tagline for the film
Advertisement:

A 1974 novel by Larry McMurtry, Terms of Endearment is best known for its 1983 film version, the debut feature of James L. Brooks. With an All-Star Cast headed by Jack Nicholson and Shirley MacLaine in their Oscar-winning roles, the film went on to win five total Academy Awards, including Best Picture.

Aurora Greenway (MacLaine) and her daughter Emma (Debra Winger) have grown apart over the years. Aurora has found herself with a string of suitors, most notably retired astronaut Garrett Breedlove (Nicholson), while Emma too has an affair in the midst of her loveless marriage. When Emma is diagnosed with cancer, everyone's relationships will be tested.

McMurtry published a sequel to the original novel, The Evening Star, in 1992; this was itself adapted into a film four years later, with MacLaine and Nicholson reprising their roles.