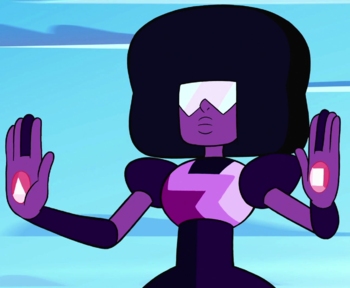 Those gems are her actual body, and the body is a projection of the gems.
Advertisement:

. In various works of fiction it sometimes appears as some sort of monster, alien or even on occasion a Mineral MacGuffin. It may even be some sort of Power Crystal (especially if they're mechanical in nature). The gem(s) or crystal(s) may even glow at times in the entity's life to show a reaction towards events going on in its life. Of course it's even more likely to be used due to Rule of Cool.

Subtropes include Carbuncle Creature, for creatures based on, or which are, carbuncles; Crystalline Creature, where a creature is composed solely of crystal and nothing else; and Gem Heart, where the mineral component is a single large gem somewhere in the being's body.

Compare with Silicon-Based Life, Body to Jewel and Rock Monster.