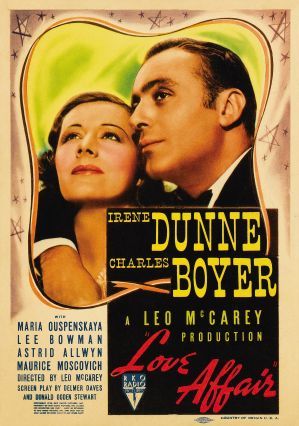 Love Affair is a 1939 romantic drama film directed by Leo McCarey with a screenplay by Delmer Daves, starring Irene Dunne and Charles Boyer.

Michel Marnet (Boyer) is a French painter who is better known as a notorious playboy. Marnet boards a ship bound for America, where he will meet his fiancee. While on board he meets Terry McKay (Dunne), a former nightclub singer who is also going home to meet her fiance Ken, who owns a department store. They initially try to avoid each other out of fear of gossip, but eventually they fall in love. They agree to leave their respective partners and marry. Michel, who needs to get a real job, suggests they rendezvous atop the Empire State Building in six months. He starts selling paintings, she goes back to work as a singer, and six months later they arrive for their Empire State Building rendezvous—but Terry is hit by a car as she crosses the street in front of the building. She is left with crippled legs, bound to a wheelchair. Michel thinks that she ditched him, and doesn't even know where to contact her in America to find out what happened. So he goes on broken-hearted, while she decides not to contact him and elicit his pity. But fate will bring them together again.

Love Affair received a very famous Shot for Shot Remake in 1957, titled An Affair to Remember, starring Cary Grant and Deborah Kerr and also directed by Leo McCarey. Another remake, titled Love Affair and less faithful and successful, appeared in 1994, with Warren Beatty and Annette Bening.