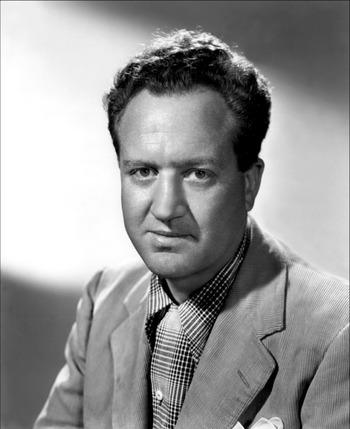 Delmer Lawrence Daves (July 24, 1904 – August 17, 1977) is an American screenwriter and director, active during The Golden Age of Hollywood, specializing in The Western and Film Noir.

Unlike other directors of the Golden Age, Daves actually went to college. A graduate of Stanford University, Daves nonetheless became fascinated with movies and moved to Hollywood, working in the Silent Era as a prop boy on such films as James Cruze's The Covered Wagon. He had long wanted to become a filmmaker but he first became famous as a screenwriter during The '30s. His most famous credits include The Petrified Forest (Humphrey Bogart's first major role) and the original 1939 Love Affair directed by Leo McCarey (remade by both men as An Affair to Remember 18 years later).

As a screenwriter, Daves was respected by producers and peers for his breadth of knowledge and research and his feeling for characterization and scene. Producer Jack Warner gave Daves his first directorial assignment for Destination Tokyo, a well-regarded propaganda film about submarine warfare starring Cary Grant, because he didn't trust anybody else to get the technical details right. He also directed Pride of the Marines starring John Garfield, a movie about the travails of returning veterans released a year before The Best Years of Our Lives. He first attained critical acclaim for The Red House starring Edward G. Robinson, and the Film Noir Dark Passage starring Humphrey Bogart and Lauren Bacall, famous for its cast and its highly experimental first-person original section.

In The '50s, Daves made 8 westerns of which two remain well known, while the others became cult classics. Broken Arrow was celebrated for being the first pro-Indian Western film, while 03:10 to Yuma endures as a classic of the genre. In addition to this, Jubal, The Hanging Tree, and The Last Wagon are cult favorites for the likes of Martin Scorsese and French critic and filmmaker Bertrand Tavernier. After some heart problems emerged while he was directing The Hanging Tree, his doctors advised him to take on less-demanding assignments, so Daves made a sudden about-face and started directing romantic Melodrama films in the vein of Douglas Sirk. His first film in this career phase, A Summer Place, with Sandra Dee, got lukewarm reviews but was popular at the box office (and sported a beloved Max Steiner score). Subsequent films in this style were critical and financial flops, which ultimately damaged his reputation. Still, Bertrand Tavernier commended Daves for being one of the genuinely true liberal film-makers of the Golden Age, in terms of his criticism of Anti-Intellectualism and xenophobia, in addition to his craftsmanship as a film-maker, commending him on his genuinely striking visual style, experimental nature, and his professionalism, noting that he was one of the few Hollywood directors who never relied on second unit and insisted on doing every scene himself.

Two of his westerns have been released on The Criterion Collection.