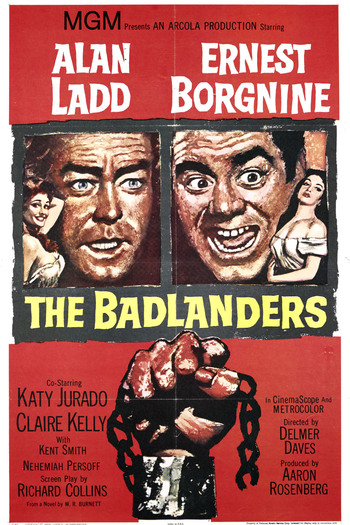 The Badlanders is a 1958 Western film directed by Delmer Daves, starring Alan Ladd and Ernest Borgnine. It was written by Richard Collins, loosely based upon the novel The Asphalt Jungle by W. R. Burnett.

In 1898, two men are released from the Arizona Territorial Prison. One, mining engineer and geologist Peter Van Hoek (Ladd), the "Dutchman", tells the warden he was framed for the robbery of a gold shipment from the Lisbon Mine. The other, John McBain (Borgnine), killed Bascomb, the man who had cheated him out of his land.

The two men head separately to the town of Prescott, where neither is welcome. The marshal, whom Van Hoek accuses of framing him, orders him to leave town on the next stagecoach, at sundown the next day. When the Dutchman gets a room at the hotel, he meets fellow guest Ada Winton (Claire Kelly), the lonely mistress of Cyril Lounsberry (Kent Smith).

Meanwhile, McBain rescues Mexican Anita (Katy Jurado) when she is accosted on the street by some men. Though Leslie (Adam Williams), the deputy, saves McBain's life in the ensuing fight, he gives McBain the same deadline to leave, even though Mc Bain's folks settled the township. A grateful Anita invites McBain to stay at her place, and the two are attracted to each other.

The Dutchman gets Sample (Robert Emhardt) to introduce him to Lounsberry. Lounsberry had married Bascomb's homely sister for her money. Van Hoek offers to sell him gold ore from an extremely rich deposit that only he knows about. It is worth at least $200,000, but Van Hoek will be satisfied with half that amount in cash. He lies when Lounsberry jokingly asks if it is from his wife's Lisbon Mine. The prospect of being a rich man in his own right and leaving for Europe with Ada makes Lounsberry agree.

Van Hoek recruits a reluctant McBain and demolition expert Vincente (Nehemiah Persoff) for his scheme. They time it so the explosion needed to extract the ore goes off as the same time as the regular blasting. They get the ore out, but when Van Hoek and McBain take it to Lounsberry, he tries to double cross them. Leslie is killed and McBain injured in the ensuing gunfight. Van Hoek takes McBain to Anita's place and digs out the bullet, then leaves in a wagon with the gold. However, Lounsberry, Sample and their men soon corner him in town during a fiesta. McBain goes to the Dutchman's aid. Then Anita has her many Mexican friends surround and disarm the villains. Van Hoek entrusts McBain and Anita with the gold, telling them he will meet them later in Durango to split it up equally. Then, keeping his word, he leaves on the stagecoach with fellow passenger Ada.