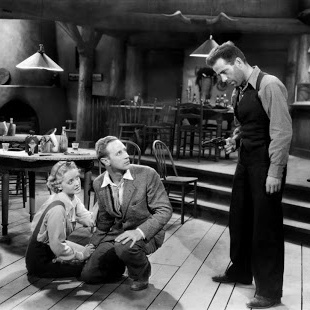 The Petrified Forest is a 1936 film directed by Archie Mayo and starring Leslie Howard, Bette Davis, and Humphrey Bogart, adapted from Robert E. Sherwood's stage play of the same name, with a screenplay by Delmer Daves.

Alan Squier (Howard) is a failed author who has become a tramp and at the start of the film is hitchhiking across America. He wanders into a lonely gas station and diner in the Arizona desert, where he meets the waitress and owner's daughter, Gabrielle Maple (Davis). Gabrielle is thoroughly sick of the desert and the life of a waitress and longs to escape to France, and she is charmed by debonair, sophisticated Alan. In fact, Gabrielle is so charmed by Alan that she wants to go away with Alan, but he leaves on his own. Fate then intervenes when notorious gangster Duke Mantee (Bogart) and his gang, who recently escaped from a nearby prison, come to the gas station seeking a place to hide out.

The Petrified Forest was something of a precursor to modern Film Noir and featured Bogart in one of his first starring roles, reprising the character he played on stage. The story was also later adapted into a 1955 live televised version, with Lauren Bacall and Henry Fonda in the roles played here by Davis and Howard.

Tropes associated with The Petrified Forest are: