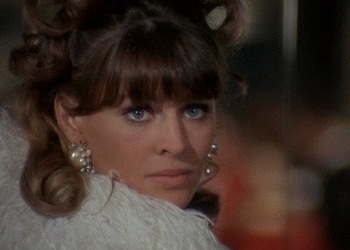 What lies behind that endearing kookiness? Perhaps it's better not to ask...
"Richard Lester's "Petulia" made me desperately unhappy, and yet I am unable to find a single thing wrong with it. I suppose that is high praise."
— Roger Ebert, in his four-star review of the film.

Petulia is a 1968 romantic drama film directed by Richard Lester, starring Julie Christie and George C. Scott. It was adapted from the novel Me and the Arch Kook Petulia by John Haase.

In San Francisco, recently-divorced physician Archie Bollen (Scott) and newly-married socialite Petulia Danner (Christie) are both dissatisfied with their lives. The problem is that neither knows what it is he or she wants. Archie had a perfectly loving marriage until he chose to end it; why, not even he can say. Petulia creates around her a frenzy of activity to escape something in her life.

The two embark on an affair as a result of simply another one of those inexplicable impulses that mark Petulia's decisions. Their different personalities — Petulia's whimsical intensity and Archie's gentle passivity — gives both a fleeting understanding of what it is they lack. However, that very combination of impulse and lack of resistance leads them to mutually reject their chance at a meaningful relationship.