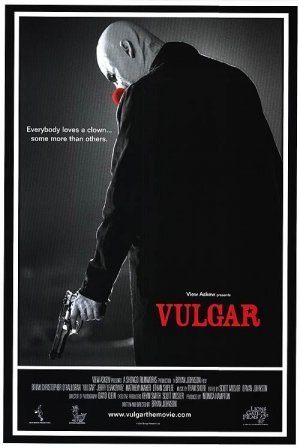 After his Breakthrough Hit Clerks, Kevin Smith decided to use his newfound success as a filmmaker to give his friends opportunities to make their own movies through his production house, View Askew. 2000's Vulgar, written and directed by Smith's childhood friend Brian Johnston (aka, Steve-Dave Pulasti), was one of them.

Will Carlson (Brian O'Halloran) is an out-of-work birthday party clown just trying to make ends meet to live in his dilapidated house and pay for his abusive mother's nursing home. While he loves his job, gigs are difficult to come by, and he's frequently terrorized by local hoodlums any time he drives to one. Desperate for money but not willing to give up his dream job, Will comes up with a Get-Rich-Quick Scheme to do bachelor parties under the name "Vulgar The Clown," showing up in clown makeup and fishnets as a gag before the real stripper comes. With his new plan in mind, Will puts out an ad and soon gets his first gig.

Said gig turns out to be a set up by a father/sons trio of rapists, who videotape Will as he's drugged, raped and humiliated. Will goes home and spends the next several days having a violent mental breakdown.

Luckily, things pick up for him immediately after when his first gig after his assault when he manages to take out an angry father holding the birthday girl hostage. Now local hero, Will uses the media attention to boost his business and is soon making a considerable living, eventually getting his own TV show. Unfortunately, Will's new celebrity status attracts the attention of his rapists, who have have edited the footage of their assault to look like a (consensual) sex tape and threaten to blackmail him with it, convincing Will to take matters into his own hands.

Has nothing to do with Vulgar Humor.