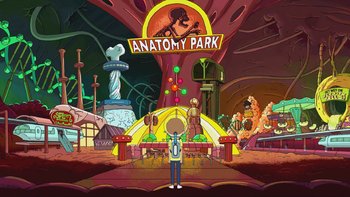 "Welcome, Morty. Welcome... to Anatomy Park!"
Written by Eric Acosta & Wade Randolph
Directed by John Rice
Morty: Oh, my God! This is insane! Spleen Mountain? Bladder Falls? Pirates of the Pancreas?
Rick: You got a problem with that last one, Morty?
Morty: Huh? No, no. I'm just reading 'em out loud in the order that I'm seeing 'em.
Rick: Okay. All right. If I sounded a little defensive, it's because... Pirates of the Pancreas was my baby. You know, I got I got a lot of pushback when I pitched it, Morty. I guess I'm still a little defensive.

Rick shrinks Morty in order to send him into the body of a homeless man to help him with a nanoscale theme park built inside of his body. Meanwhile, Jerry makes his family give up their various technologies so they can bond as a family in honor of his parents' visit for Christmas, only to regret it when they introduce him to their new black "friend" Jacob.

"Oh, unbelievable. We got we got a bunch of robot, computer people, sitting around with their faces stuffed into computer screens. Do you guys realise that Christ was born today? Jesus Christ, our savior, was born today. Are are are you people even human? What kind of Christmas is this?"