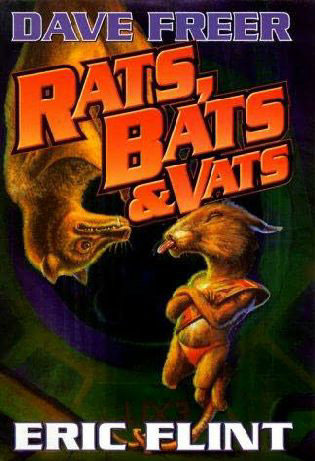 Rats, Bats, and Vats and The Rats, The Bats, and The Ugly are military Science-Fiction books by Eric Flint and Dave Freer that take place in the same universe on a colony planet called Harmony And Reason with a Bug War going on. But wait, it gets better: the colony was put there by a slow ship so a good deal of the passengers were of the genetic material variety ... instant conscripts! Hu, What not so instant? Well, crud. But wait, there are friendly aliens who are willing to sell us their advanced technology, too bad their ships FTL broke down on the way to warn us about the bugs. This technology mostly consists of the implant slowshield/hardshield chip and the Soft-Cyber chip, see below.
Advertisement:

The first book deals with Chip Connolly, a vat-brat conscript, and a number of rats and bats getting Trapped Behind Enemy Lines, facing insurmountable odds. At the same time, Virginia "Ginny" Shaw, a young and innocent heiress, her cyber-uplifted galago Fluff, and her Korozhet tutor get captured by the Magh. Against all odds, Chip, the rats and the bats manage to save the girl and win the day.

The second book deals with Chip's court martial over the aforementioned events and Ginny and the others' attempts to save him from the firing squad.

The books can be read online here

The second book (and parts of the prequel) involve the bureaucracy striking back against the heroes that made them look bad by succeeding. This brings in a whole host of Lawyer Tropes (and loads of major spoilers)