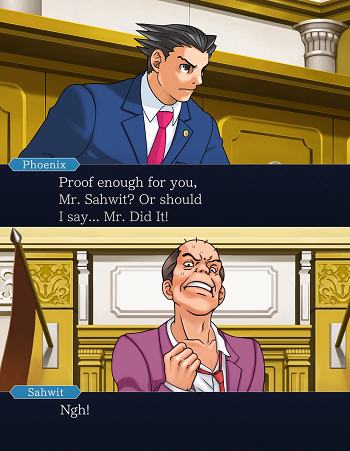 He who Sahwit, done it.
Judge: Mr. Wright, are you indicting the witness as the real murderer?
Phoenix: Of course! That is precisely what I am doing!
— Phoenix Wright: Ace Attorney – Justice For All, Case 1
Advertisement:

An unconventional courtroom tactic which involves accusing an unlikely or controversial witness of being the perpetrator of the crime—particularly the accused's spouse or other close family member. Whether or not this accusation is true is immaterial. The point is to cloud the issue and raise reasonable doubt.

An unscrupulous cousin to The Perry Mason Method. Also related to Frame-Up, though this is more spur-of-the-moment (and is often an attempt at specifically Framing the Guilty Party). If a witness does this to him/herself, it's a case of Taking the Heat. If the accuser turns out to be right by complete accident, it may overlap with Accidental Truth and Right for the Wrong Reasons.

Alternative Title(s): Accusing The Witness, Or Maybe YOU Did It