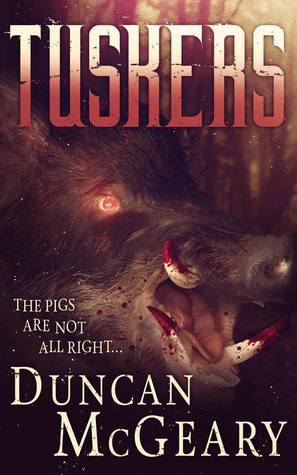 They prefer their meat rare.
"The aporkaclaypse is a trifle hammy but those who want to pig out on horror could do worse than this slaughterfest which brings home the bacon. It's Hameggdon-time in a small Arizona town which learns quickly its hogs are no boar but ready to gorge themselves on the inhabitants. More finicky readers of frights may feel giving this book a high rating is putting pearls before swine but this book is not swill for the trough either. So polk your head on down to the pen and pick up Tuskers, a novel of butchery which will leave you wishing someone would turn these mutant suidae into sausage."
C.T. Phipps' review on The United Federation of Charles.

Barry had created a little piece of paradise in his southern Arizona backyard—until the javelinas came.His battle to rid his property of the wild pigs soon escalated into war. Too late, he realized these weren't ordinary animals. They were something new, something meaner and smarter. These pigs weren't just at war with him; they were at war with the human race.

And the humans were losing.

Duncan Mcgeary says he was inspired by a 'nature strikes back' theme. "We keep pushing nature and it's going to backfire on us someday. We are pushing into natural places, and the wildlife is either adapting or dying. My idea [with TUSKERS] is that someday they are going to mutate or adapt in a way that is dangerous to humans."

Tuskers is the first volume in Duncan Mcgeary's Wild Pig Apocalypse series, published by Ragnarok Publications. It's sequel, Tuskers II: Day of the Long Pig was released in May of 2015.