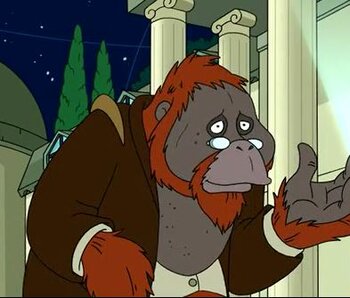 The non-human great apes have various species-wide stereotypes associated with them. Gorillas are either gentle and harmless or brutish thugs, chimpanzees are often treated interchangeably with monkeys, and so are either smart, scary, or silly. Bonobos are usually lumped in with chimps in pop culture, but when they do appear, they're noted mainly for their loose sexual behavior (No, seriously, this is well-observed

And then there is the orangutan of western Indonesia note There are three: Sumatran, Bornean, and Tapanuli. Generally lacking the imposing stature of gorillas or the comedic aspects of chimps, most fictional portrayals of orangutans instead focus on their intelligence. In many modern depictions, orangutans are shown as being highly intelligent and wise, having much knowledge of the world around them, both material and mystical. This was born and still exists in the mythology of their native Sumatra and Borneo, which does revere orangutans as being such, to the point in some myths they're human ancestors. For those reasons, orangutans will also often be shown as intelligent by human standards.

If a story features multiple species of apes or primates and humans don't count as one of them, orangutans will probably land the role of The Smart Guy. However, unlike chimpanzees, which are also often portrayed as intelligent in fiction, they'll often be shown as calm and level-headed, rarely being a Mad Scientist or Evil Genius.

This is Truth in Television, as orangutans have demonstrated considerable hallmarks of what we'd consider intelligence, from crafting and using tools, using plants as medicine, self-recognition in mirrors, and advanced problem-solving. In fact, they are believed to rival chimpanzees as the smartest non-human primates. A specific real life orangutan that was known for being intelligent was Ken Allen

, who was famous for figuring out how to escape from his zoo enclosures so that he could walk around and look at the other animals.

A Sister Trope to Gentle Gorilla. Opposite of Maniac Monkeys and Killer Gorilla. Subtrope of Intelligent Primate.