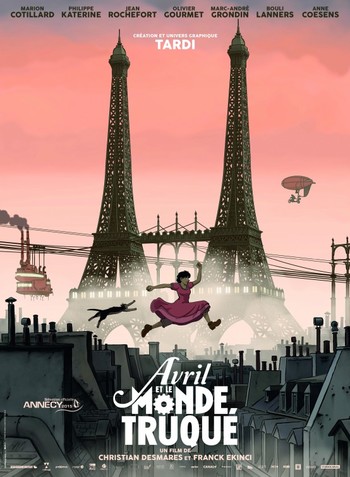 There's more to life than chemistry.
"And so, Emperor Napoleon the 3rd meets his untimely end, leaving behind a bereaved nation and a son who the very next day is crowned Napoleon the 4th. Less warlike than his father, the young emperor signs a peace treaty with Prussia thus averting war and changing the course of history by securing the French throne for a long line of Napoleons. Several years later, the world's leading scientists begin to mysteriously disappear as if into thin air. Despite the best efforts of police across the globe, no one can discover why or where they've gone: Branly, Einstein, Hertz, Marconi, Nobel, Pasteur, and a host of other brilliant minds. Without its scientists, the world never sees the wonders they would have invented or discovered: no electricity, no radio, no television, no automobiles. Scientific progress comes to a halt."
—The Narrator
Advertisement:

Paris, 1941. A family of scientists is on the brink of discovering a powerful longevity serum when suddenly a mysterious force abducts them, leaving their young daughter, April, behind. Ten years later, April (voiced by Academy Award winner Marion Cotillard) lives alone with her talking cat, Darwin, and carries on her family’s research in secret. But she soon finds herself at the center of a shadowy and far-reaching conspiracy, and on the run from government agents, bicycle-powered dirigibles, and cyborg rat spies.