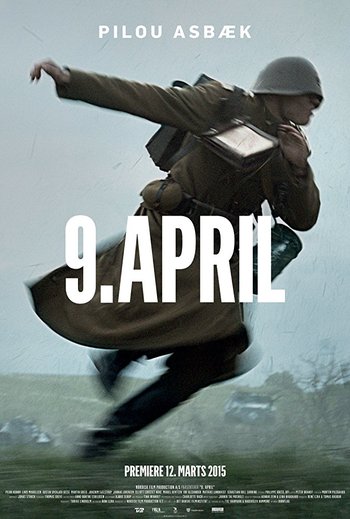 On April 9, 1940, Nazi Germany invaded neutral Denmark, mainly to use it as a staging area for the invasion of Norway. The first troops crossed the border at 4:15 that morning. Faced with an untenable military situation, and fearing the loss of life that would result if Copenhagen were bombed by the Luftwaffe, the Danish government formally surrendered less than two hours later. Nevertheless, elements of the Danish army continued fighting for several more hours, unaware of the surrender due to German radio jamming and the fog of war.

April 9th (9. April) is a 2015 Danish war film directed by Roni Ezra. It tells the story of a platoon of Danish bicycle infantry led by Sekondløjtnant (Second Lieutenant) Sand (Pilou Asbæk) which rides out to meet the invaders on that fateful morning. After losing contact with his company commander (played by Lars Mikkelsen) and the rest of his unit, Sand leads his platoon in a fighting retreat, trying to Hold the Line until the rest of the Danish Defence can join in the battle.

Screenwriter Tobias Lindholm based his script on historical records and interviews with surviving veterans.