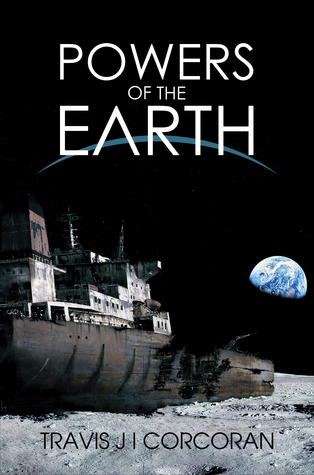 What is a large ocean shipping freighter doing on the Lunar Surface? The book makes good on its cover.
Advertisement:

The Aristillus Series is a (mostly) hard Science Fiction series of novels by author Travis J.I. Corcoran, taking much inspiration from Robert Heinlein's The Moon Is a Harsh Mistress but asking, among other things, "what if every moon colonist had an anti-materiel rifle?" Set in and around the year 2064 at the start of the series, it portrays earth as a stagnant economic power in the midst of a decades-long depression thanks to the iron-fisted/velvet-gloved global government that has complete control over the planet's productive capacity. Rather than a prison colony where malcontents are exiled, the moon colony was founded by the CEO of an earth corporation and the scientist who invented the AG drive escaping the nationalization of earth companies (and likely prison sentences for each CEO), and the lunar 'culture' reflects their entrepreneurial spirit. The colony, located in the Aristillus crater, has become economically independent and is drawing more and more settlers, which is causing the Earth powers to finally sit up and take notice.

The series largely focuses on the Founder of Aristillus and CEO of a tunneling company Mike Martin, and his immediate associates including girlfriend Darcy Grau, who pilots the ''Wookkiee'', as they try to navigate through the increasingly dire threat posed by the earth's military forces, even as the colony continues to grow. The Book also follows a quartet of dogs and their friend/rescuer John as they undertake an expedition to circumnavigate the moon on foot, which quickly becomes a dangerous endeavor as the conflict with earth heats up.

The technology featured in the series is mostly accurate to real life but for three "special" techs: an anti-gravity drive, talking dogs with genius level intellect, and a pre-singularity AGI. As Corcoran takes consistency and realism seriously, anytime a ship (or other object) is entering or leaving orbit you can bet that he's done the math and made sure it would work in real life, so expect absolutely minimal handwaving of any implications of the technology at play here.

The series so far includes the following novels:

both of which won the Prometheus Award in their respective years.

There are more Novels in progress:

The short stories Staking a Claim and The Team take place shortly before the events of the novels and explain the backstories of certain main characters.

The Aristillus series contains examples of: