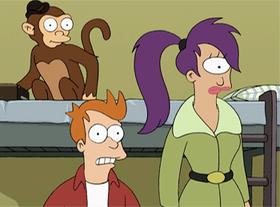 The Planet Express crew's latest mission is to deliver a crate to Professor Farnsworth's office at Mars University. While touring the campus, Bender comes across a chapter of his old fraternity, Epsilon Rho Rho (Err) and Fry enrolls in college so he can drop out and gain the kudos of being of a college drop-out.